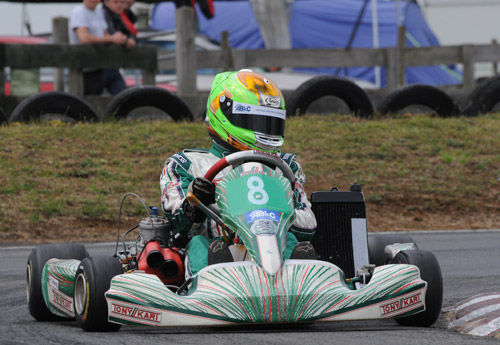 The kart is a Tony kart EVRR chassis with front and rear brakes with adjustable bias, not seen on non-gearbox karts. It is powered by a 125cc reed valve "Vortex" engine with a 6-speed sequential gearbox and hand operated clutch. 0-60 is estimated at around 3 seconds and onto a top speed of around 115mph on long circuit and 95-100mph on short circuits.

18 year old Liam has been competing in the current KZ2 catergory since 2009 and has taken numerous titles over the past few years starting in his firt year taking the Midland championship title. In 2010 he took the prestigious British GP title held at Cadwell Park. In 2011 he won 4 out of 6 possible championships again winning the British GP title along with the british "0" plate title, the UK Cup title and the Masters title aswell as making his european debut at the Le Mans race circuit in France in a division 1 superkart. Liam holds lap records at Shennington, 3 Sisters and oulton park! 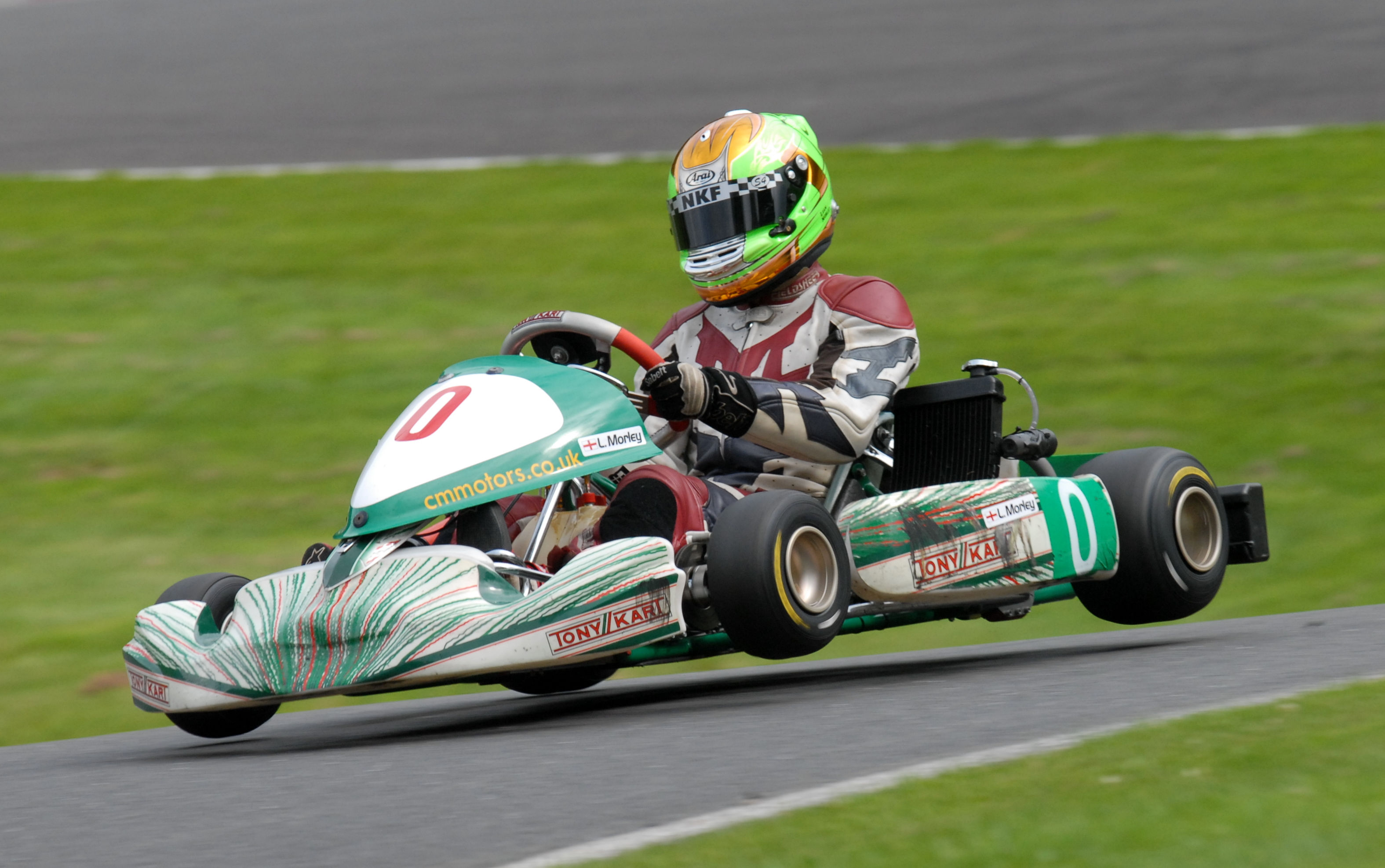 Weekend report: Redspeeds liam morley arrived at the French Le Mans track on the back of a successful debut at Oulton park in mid september.

Friday morning arrived with the with the track soaked in the nights rain.

First session would be a tricky and nervous drive out for the 18 year old. Morley achived 5 laps in the damp conditions. Session two would be the first of a few retiring session for L...iam. The problem being gearbox issues. Would the troubled friday test hamper Morleys performance for saturdays all important qualifying sessions.

Saturday would be the day the Carnforth based Morley to shine. With the track being dry for qualifying 1, morley set off with the quest to put the Redspeed superkart back to the top of the time sheets as he proved on his debut weeks before. 5 laps into qualifying Morley was in the top 6. After weighing and back on the track Liam was back out egar to improve his first attempted time. 1.39.849 would be his fastest time putting him 8th of the grid.

Qualiflying two was wet. Most drivers opted to watch from the stands including liam.

Sunday arrived with the dew of a fresh october morning. Morley lined up on 8th. Race was declared dry mins before the start, the redspeed mechanics worked frantically changing tyres to slicks.

As the pace car pulled in the thunder of the 250 twins roared down the famous Le mans track. Liam struggled to put power down off the start slipping back to 9th. With the track drying and the times tumbling down Morley was on a charge. Using the out right speed and ablity of the 18 year olds talents he brought his kart home in a respectable 7th. "Race one was hard, losing alot of momentum as struggled to put my power down"

Starting on a fully dry track in race two morley had his chance to prove he is worthy to run with the best in europe. As the superkarts took the start Morley was ready to pounce. Flying round the first lap challenging so tough opposition liam came round in 7th. The chase was on. 4 karts motored nose to tail down the start staright, Morley at the back getting the tow and pulling out to pounce for his first victim of an exciting race. Liam had made his way into 5th by lap 6. His times showed he was on the move. Again gaining a tow down start line, with the first sweeping right hand 138mph bend approching fast Morley put everything at risk passing Cyril Vayssie round the outside. This showed he ment business in a class he just moved up to.

On the start line redspeed and Liams father counted down the laps. 3 laps to go Morley still pushing hard, setting personal best times one after another. Looking home and dry for a 4th in a major european event Morleys luck ran out. Dreaded gearbox issue hit. Liam pulled out 3 laps from the flag. "its dissapointing to not finish after being so strong in race two" .

It began to rain for the first heat on staurday but everyone was on slicks, Tom moore got trapped in the pits trying to change to wets but James Glenister proved to be the master of the tricky conditions, passing Richard Parmer for the win.

James Mudd cam the fore in heat 2, sunday luckily now dry, beating off Morley and Glenister, whilst Nick Smith broke a chain. Daniel Borton the had his turn in the limelight for heat 3 as he held off Mudd and Sam Moore, who was trying out a Sodi kart but has retired in a heat.

With times so close a good gris position was vital. As Glenister led them away, Morley leapfrogged Tom Witts on lap 2 and set off to chase Glenister. Borton and Mudd had kept with the lead group, as Witts slowly drifted to the back of the 5 karts.

Daryl Henderson spun at stratford hairpin then retired, whilst Matt Dittmann went into the lead of the second group. Tom Moore passed his brother for that position, but Sam retrieved it, Tom falling back behind Joe Charlton but managing to get 7th back by the flag.

Morley hadn't taken long to find a gap in Glenisters defence, as he then puled out amost 1 second from the rest. Mudd kept Borton at bay to complete the podium places in a frantic foursome. " The vortex is brilliant and the cassis is working well" observed a delighted Morley.

In changeable conditions the final of the GP was to be a thriller with Vortex RVXX engines taking 3 of the top 4 positions. With an 18 minute race this wasn't going to be decided until the last lap. A group of 5 karts broke away changing the lead lap after lap.After being denied the outright win last year Liam wasn't going to be denied this time, and as he exited the woodlands for the last time  he would  cross the line nearly a second ahead. Matt Isherwood would take 3rd closely followed by Mark Brookman. All powered by the amazinig Vortex RVXX

In timed qualifying he destroyed the opposition with his nearest competitor nearly 3 seconds behind. In race one a mature drive saw him drive away from the opposition to finally win by 16 seconds and smash the lap record by 6 seconds.

In the final from pole he made a good start and just drove away, the power of the Vortex RVXX really showing its strength. The final tour was very sweet as this was to be Liams first major title.